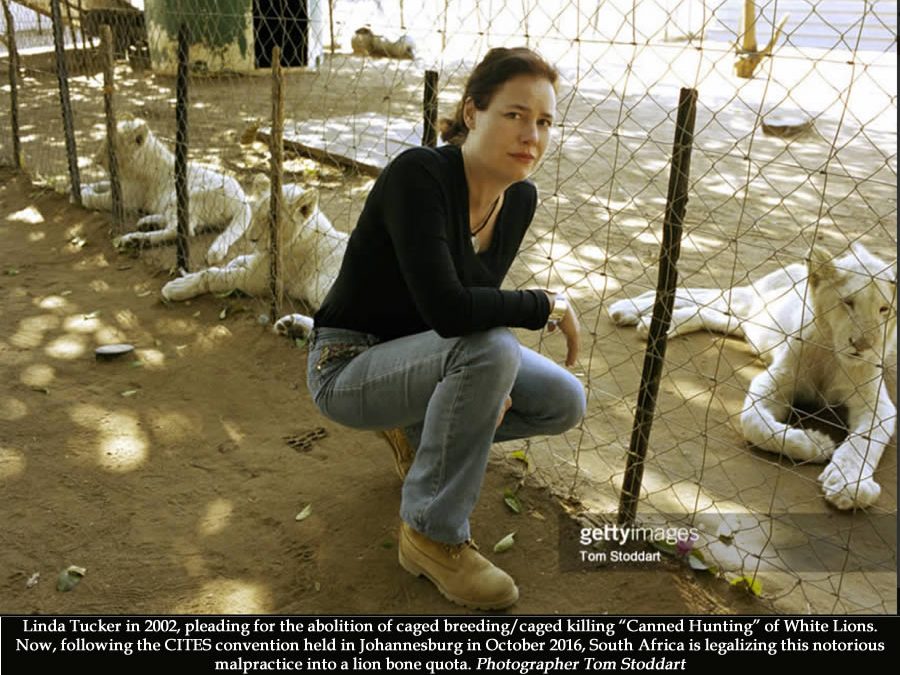 In light of the recent death of West Mathewson, owner of Lion Tree Top Lodge, we would like to re-share this article written by Linda Tucker and published on the Huffington Post website in early 2017.

All the recent attacks by captive lions on people were not ‘unprovoked’. Man provokes, nature responds – and then man tries to blame nature.

We are profoundly saddened to learn of the tragic death of one man and the serious injuries sustained by his friend when they were attacked by escaped White Lions near Hoedspruit in January. Note that these lions were captive. They were hand raised, and used commercially by Lion Tree Top Lodge for a “Walking with Lions” experience offered to guests, including young children.

It was an accident waiting to happen. Yet it is not an isolated case. Recent tragedies include the death of a 12 year old boy at Otavi Game Park near Parys. Nkalamelo Latha was taken into a lion enclosure by an employee on 18 August 2016, where he was attacked and killed.

Last year a British tourist was killed by a lion after opening her window at The Lion Park, a facility well-known for factory farming of lion cubs. This follows on the death of a Protrack anti-poaching officer after captive lions, which had suffered serious brutality, were released into a nearby reserve, and the death of a Johannesburg zoo official on Valentine’s Day 2013 after a lioness pounced on him when he left her cage door open, and many other incidents conveniently swept under the carpet.

Go to YouTube to see countless videos of lions and other wild animals attacking humans. Man provokes, nature responds – and then man tries to blame nature.

These are all accidents waiting to happen. The full extent of this tragedy can only be understood in the context of the Lion Bone Trade meeting taking place at the same time. Unbeknown to the South African public, this meeting was convened in order to formalise and legitimise the captive breeding/captive killing of South Africa’s most iconic animal.

The past tragedies are negligible compared with the future catastrophe that looms if our government goes ahead with this heinous commodities market of bones and body parts. We should be searching deep into our hearts and asking ourselves, is this the best we can do as custodians of our magnificent planet?

It’s noteworthy that the action taken by White Lions from Lion Tree Top Lodge followed directly after a Facebook post by an idiotically self-important woman, Ms van der Merwe, showing a photograph of a white lioness originating from Timbavati, and stating that this year she’ll be shooting her.

As true loving citizens of this planet, the onus is on us to take urgent and necessary steps to de-authorise these so-called authorities that are killing our future.

What’s appalling is that Ms van der Merwe would be within her rights. It’s legal to hunt lions, including the last surviving white lions, in the wild. It’s legal to hunt lions in captivity. And now it’s legal to produce lions on mass in cages to kill them. As a nation which struggled so hard to achieve equal rights for humans, we need to ask ourselves where we went so catastrophically wrong with animal rights, first and foremost with the king of animals.

As stewards of the earth and its blessed biodiversity, we are accountable to the creator. Can any one of us with heart and conscience condemn our most proud species to the cruelties and indignities of a lifetime’s confinement in a processing plant terminating with a quota of 800 carcasses in cross-border trade annually. Where did we go so wrong?

This diabolical plan is supported by CITES, which, as its name indicates, is the Convention for the International Trade of Endangered Species, not the International Protection of Endangered species. This illustrates the presence of greed in governing bodies not only locally, but internationally. As true loving citizens of this planet, the onus is on us to take urgent and necessary steps to de-authorise these so-called authorities that are killing our future.

January’s Lion Bone Trade meeting was extended to a select group of “stakeholders”, of which I was deemed to be one, having engaged in draft policy and lion conservation strategy for over 20 years. Yet I had to ask myself: who are the real stakeholders in this meeting? If their voice could be heard, what would Lions say of such lamentable policy making? We cannot expect to continue exploiting wild animals, without retaliation.

If humankind won’t speak for lions, lions will find a way to be heard. It’s time we listen to the plight of nature. It’s time our so-called “authorities” are held accountable. It’s time we show lions the respect and protection they deserve as a living heritage for our children’s future.