In the 90s, Linda Tucker’s ground-breaking research first revealed geographic and geodetic links to Ancient Egypt, published and shared with the world in her book, Mystery of the White Lions (Earthyear 2001). She identified that the birthplace of the White Lions in Tsau – heart of today’s UNESCO Kruger to Canyons Biosphere – aligns exactly with Giza, resting place of the Sphinx, thus uncovering a profound mystery that links White Lions with humankind’s greatest lion riddle.

According to Credo Mutwa, the original meaning of the word “Timba-vati” – now the name of a commercial private nature reserve in the region – refers to: “The Place where the StarLions came down.”

Ecological and cultural importance of the White Lions

The importance of the White Lions’ sudden re-occurrence on the brink of the polar reversal and climate change is directly linked with the appearance of other prophetic “spirit animals” on all continents, including the White Buffalo and the Spirit Bear of British Columbia. Linda Tucker’s efforts have brought together Indigenous elders and leading scientific authorities in the heart of White Lion territories, to unify strategies and outcomes.

In accordance with other manifestations of a rara animalis in other ecosystems, ancient belief holds that the White Lions are Nature’s greatest blessing, or final warning.

Linda Tucker’s life’s work celebrates the White Lions as a living heritage, in a strategy to restore our relationship with our planet.

Ecologically
Apex predator and “Capstone animal” restoring the biodiversity of a critical important ecosystem through the ecological principles of trophic cascading.

Geographically
Unique speciation on the Golden Meridian Zep Tepi – corresponding with the East African Rift Valley, the tectonic seam in the African continent, which scientists identify as the “Birth Canal of Human Species”.

Climactically
Precursors to the forthcoming Ice-Age.

Astrologically
Turning of Ages which astrologically marks the brink of the Leo-Aquarius Age.

Spiritually
Symbol of unification and good governance, providing luminous inspiration to achieve what may seem impossible: a leadership plan for peace and planetary regeneration.

MYSTERY OF THE WHITE LIONS
Children of the Sun God

This is Linda Tucker’s firsthand account of her journey into the mysteries of the most sacred animal on the African continent: the legendary White Lion. This book reveals the knowledge and ceremonies of Old Africa and the overwhelming love that has driven her every action to save these magnificent beasts, against formidable odds.

After being rescued from a life-threatening encounter with lions in the Timbavati game region by a medicine woman known as the “Lion Queen,” Linda embarked on a journey into the mysteries of the White Lion. It is a mystical journey into the knowledge and ceremonies of Old Africa, in which humans and lions are able to cross the species barrier—in accordance with the most guarded secrets of Ancient Egypt and humankind’s greatest riddle, the sphinx.

Scientists in our day have established that humankind’s most significant evolutionary leap occurred as a result of our ancestors’ interaction with great cats. The White Lion is a genetic rarity of Panthera leo, and occurred in just one region on earth: Timbavati. Today White Lions form the center of the notorious “canned” trophy hunting industry—hand-reared captive lions, shot in enclosures for gross sums of money. By contrast, shamans believe that killing a “lion sun god” is the ultimate sacrilege. How the human species treats such precious symbols of God in nature may determine how nature treats the human species. In this captivating, suspenseful memoir, white lion conservationist Linda Tucker describes her perilous struggle to protect the sacred white lion from the merciless and mafia-like trophy-hunting industry, armed only with her indomitable spirit and total devotion.

On December 25, 2000, in the little South Africa town of Bethlehem, a snowy white lion cub, Marah, was born. From the moment of her first meeting with Marah, Tucker’s story immediately takes off into battle, as she dedicates her every waking moment to prying Marah and her siblings from the grips of the trophy-hunting industry.

Compellingly written in the intimate style of a journal, Tucker describes with unflinching honesty her fears, doubts, hopes, and dreams, all the while unfolding for us an unforgettable tale of adventure, romance, spirituality, and most of all, justice. “A great, blazing, LionHearted book by a great warrior woman of our times.”
–   Andrew Harvey “Like a slow-burning fuse lit by the mysterious woman on that dark night, a quantum shift was waiting, and finally – three years later – it exploded” consequently, to harm a White Lion is to harm the land; to kill a white Lion is to kill the soul of Africa” 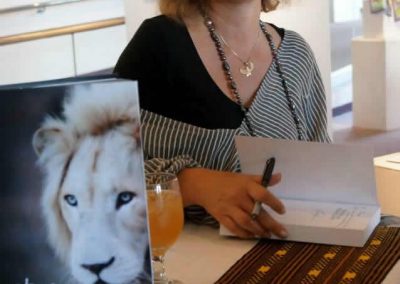 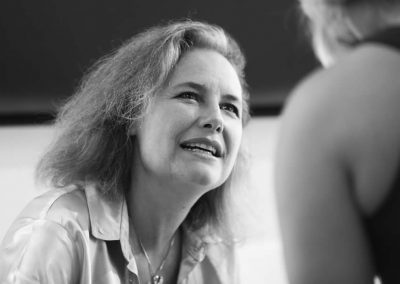 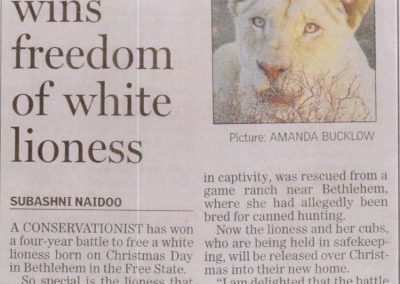 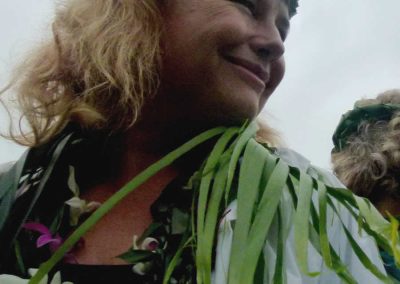