This is Marah’s story…

Returning the Queen to her Kingdom

In 2000, a white cub was born in a hunting camp just outside the town of Bethlehem (South Africa) on Christmas Day.
This baby lioness was regarded as having great sacred significance by African elders.
She was named MARAH (meaning ‘Mother of the Sungod’) by pre-eminent African wiseman, Credo Mutwa.

Unfortunately, the area surrounding Bethlehem in South Africa was the epi-centre of the notorious canned lion hunting industry, now widely known as “Blood Lions”. Lions were forcibly removed from the wild and bred in extermination camps. Cubs are first offered to local visitors and foreign tourism to be petted for a fee, then later, as tame adults, shot as high income-earning trophies.

NOTE: Although Bethlehem was one of the very first areas to perpetrate these malpractices, this industry is now a widespread in South Africa.
See Canned Hunting

Back to 2000: through continual forced removals from their natural endemic habitat into these killing camps as well as zoos and circuses around the globe, White Lions were considered extinct in the wild.

Both Marah’s parents had been forcibly removed from their birthland in the wilds of Timbavati. Although golden in colour, both carried the White Lion recessive gene. After producing many dozens of golden cubs – Marah’s siblings – a snow white cub suddenly appeared.

Because both her parents were removed for only one generation from their endemic habitat, Marah was considered of extremely high genetic integrity. However, it was her adorable nature that captured Linda’s heart.Through her studies with African lion shamans, who entrusted her with knowledge of the spiritual and cultural importance of these magnificent creatures regarded as the King of Kings, Linda was well-placed to understand the sacred nature of this amazing little lioness, Marah. Holding Marah in her arms in the middle of the killing camp just one day after her birth, Linda promised she would dedicate her life to ensuring the freedom of the lioness. It took years to honor that pledge, while a ruthless, unpoliced commercial industry of petting speed-bred baby cubs continued to grow.

Despite the lies that were disseminated by this captive industry about “saving the species,” these hand-raised lions could never hope to return to the wild as their genetics had been so badly impaired through speed-breeding. Their familiarity with humans meant they were regarded as “dangerous predators” or “problem animals” by nature conservation officials. For a beautiful and harrowing first hand account of Marah’s story, read Linda Tucker book, Saving the White Lions – now the subject of a Hollywood script.

Back in December 2000, Linda was instructed by the African elders that it was her life-task to ensure the safety and freedom of this precious lioness, and to return Marah to the land of her birthright, Timbavati, at the very heart of the Kruger to Canyons Biosphere. African elders tell us that Timbavati (“Tsimba-Vaati”) means the Place where the StarLions came down.

There is a great mystique associated with the geographical coordinates of Timbavati, which align exactly with the Egyptian Sphinx of Giza (humankind’s oldest lion riddle). This fact was first delivered to the world in Linda Tucker’s ground-breaking book, Mystery of the White Lions (2001).

Timbavati was regarded as a sacred site for many hundreds of years by African kings due to the White Lions’ re-occurrence in this specific region.

Linda understood that Timbavati was not only the White Lions’ natural endemic habitat, it was also their ancestral kingdom.

The Fight for her Freedom

Given her rare genetic pedigree, this institution in turn was reluctant to release Marah. They identified her as a prime specimen for captive breeding, and refused to part with her. Once again, Linda and her trusted team of advisors, now led by lion ecologist Jason A. Turner, had to fight for Marah’s freedom.

While a legal battle took place over the guardianship of Marah, the beautiful lioness was forced to breed by the zoo. She gave birth to a litter of snow white cubs in the dungeons, out of sight of the public.
The ancestral elders named the cubs Regeus, Letaba and Zihra, meaning first ray of sunlight in three different root languages. Their radiant names were all the more poignant as the cubs themselves were unable to see sunlight from their place of captivity for their first 9 months, while Linda and her legal team fought to free them and ensured an interdict allowing Marah to raise her cubs herself without human handling or imprinting. This lack of human contact with the cubs was vital for their re-wilding process.

As for freedom, it was now no longer a battle simply for Marah’s release from captivity but also for her three precious cubs. Marah’s adorable cubs were her direct lineage – so under no circumstances would Linda and her team abandon them to a life-time of miserable captivity.

Finally, Linda and her team won the long legal battle. The Madonna-like lioness and her three cubs were flown from the zoo to a safe haven in an undisclosed area. This was only made possible because of the extraordinary love and patronage of Mireille Vince, who was prepared to put up the funding for all four lions.

Since Timbavati is the only endemic birthplace of the White Lions, Linda was committed to returning Marah and her cubs to their natural and spiritual homelands.

The next monumental step was the acquisition of the strategic property identified by African elders as the Sacred Heartland of the White Lions in the Timbavati region, where the White Lions reintroduction to the wilds of their original birthplace could safely take place in a carefully phased long-term scientific program.

At last, Linda and her team’s challenging long-term objective is finally achievable, as Marah and her three royal cubs are the first White Lions to set paw back in their White Lion kingdom, the sacred homelands which is their birthright.

Today, there are three prides in the protected area created by the Global White Lion Protection Trust, in the heart of their ancestral homelands, Marah’s proud lineage.

Meet our Pride and Joy

Mystery of the White Lions
by Linda Tucker

Linda with Marah the lioness she rescued from a death camp in Bethlehem and returned to the wild with her cubs. 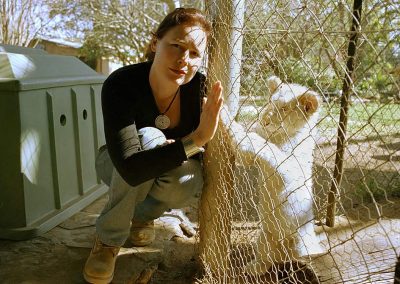 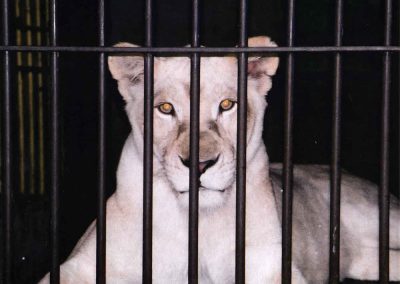 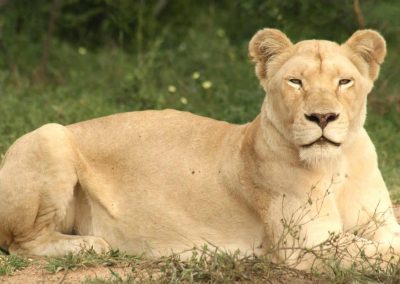 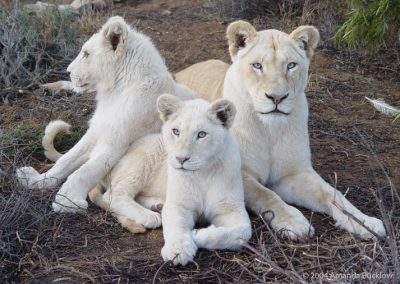 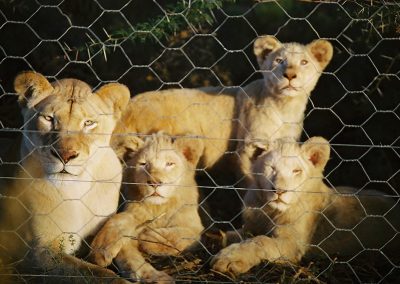 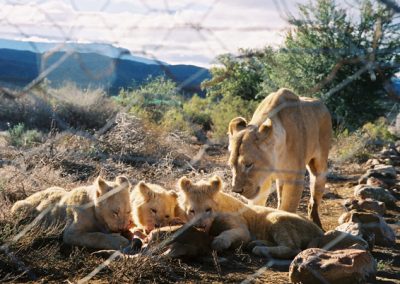 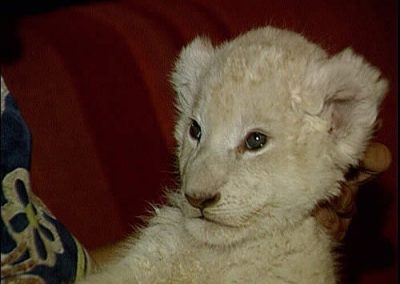